I believe that God is a power within–not a power that is only met upon death. If that’s true, it simplifies things, don’t you think? No more dialogues about whose God is valid and whose God is not since every soul is equally valid. No more wars in the name of God since God is you, me, and everyone. No more posturing that God told me to do this and God told me to say that since God isn’t separate from the speaker. No more worries about taking the name of God in vain since you might as well be cursing yourself. No more religions claiming that they have the one true path, since every path that offers a person love is the path of true redemption. No more guilt for breaking God’s rules since the rules we have are the ones we’ve given ourselves. (Excerpt from Walking Through Illusion)
Posted by Betsy Otter Thompson at 10:41 AM 1 comment:

I was in tears a few days ago; not because anyone died or I was diagnosed with leprosy, but because I was caught up in the illusion instead of the reality of my life. Here’s what was happening in the illusion: my eyes were burning from long hours in front of the computer, a librarian responded that she never bought books unless they were reviewed by one of the big four, my publisher refused to give me more promotional copies, and I hadn’t slept the night before from discovering I’d forgotten an on-line radio show.
Here’s what was happening in the reality of my life: I was thrilled and excited to have a fast, efficient, and streamlined computer with which to work. I was thrilled and excited to be finding people all over the world willing to support my efforts to get the book out there. I was thrilled and excited that a super-duper social media expert was showing me the ropes in this new-fangled digital age of communication. And I was thrilled and excited that hard work was bringing results.
Focusing on the illusion brought me heartache. Focusing on the reality brought me joy. The choice was mine; then, now and always.
Posted by Betsy Otter Thompson at 11:04 AM 3 comments:

The Terror That Ego Inflicts

I have an unreasonable fear of standing up in front of a group of people, and it doesn’t seem to matter if I’m merely announcing a book signing date, or God forbid, talking about my books or my ideas. The heart stops to pump, I start to sweat, the knees get weak, and worst of all, the fear causes a muscle spasm of lightening-like pain that shoots down my back. It’s as if ego is saying to me: how dare you be brave enough to speak up for yourself, voice an opinion, or make an effort to be strong!!! Zap, ego says, here’s what happens to you if you do try. I know I’m not alone in this fear; Toast Masters wouldn’t exist if it wasn’t widely felt. Still, I have to deal with it individually. I have a few ideas that might help and, in the meantime, I’m trying to remember that ego is only fighting so hard against this direction because so much love can be found for me in this direction.
Posted by Betsy Otter Thompson at 11:19 AM No comments:

How I Came to Understand the Meaning of Forgiveness

When I was a child, forgiveness meant nothing to me. I had arguments with my sisters, hated my parents for this or that, or wanted something I couldn't have, but the next day the slate was clean. Up I got, ready for whatever the day would bring. Yes, I had childhood fears, but no one in the family talked about forgiveness as relevant to anything around me.
As a teenager, I had issues. My older sister married young and left me to cope with an unstable mother. Those years of trying to deal with her, as well as the pressures of adolescence, were often horrendous. My parents gave me one choice for college, close to home and live at home, so no relief came in that direction either. My father was present, but not present emotionally. Still, there was never a moment when forgiveness came up as a topic of conversation.
By the time I married, the pattern was set. I took what was dished out and didn't argue; anything was better than abuse from disagreeing. I tried everything to break that pattern but nothing worked. You could say I tried forgiveness as a last resort. But still, I didn't get it right. I thought forgiveness was given for the sake of others. Not until I gave it for my sake did I understand its power. Forgiveness didn't make the lives of others easier; it made my life easier. Forgiveness didn't erase what had happened; it turned that pain into growth. Forgiveness didn't change the people with whom I struggled; it changed how I viewed them. But don't trust my analysis. You'll never believe it works until you try it and see what happens.
Posted by Betsy Otter Thompson at 11:01 AM 1 comment:

I Was a Phone Call Away From Being a Bag Lady

Obviously, I was not in a good place when this happened; I was struggling to survive. But rather than bore you with the details of how I found myself in such a predicament, I want to share the miracle that happened because of it. The situation was such that, if I didn’t receive help in twenty-four hours, I was going to be using my car as a home.

What I thought was the letting go of every last shred of pride I had – the process of asking for financial help from my estranged mother – became a process of reconnecting; not always in ways that made her comfortable with me, but always in ways that made me comfortable with myself. Our reconnection was by no means perfect, but where previously there had been no communication; there was at least some. My reaching out didn’t change the way she treated me, but it changed the way I treated myself. The fact that I paid her back as much as I could every single month - come hell or high water - didn’t give her a positive attitude regarding my path, but it gave me a positive attitude.

I thought this situation was the final and worst humiliation of my life, but it turned out to be the beginning of its rebuilding.
Posted by Betsy Otter Thompson at 1:26 PM No comments:

Do You Really Want to Complain?

I consider myself something of an expert on this subject since I spent the first half of my life complaining; mostly about my mother. She isn't this, she isn't that, she did this wrong, she did that wrong, on and one it went. As I complained about her, she complained about me. Who was this woman??? She was my perfect mirror, that's who. Not until I stopped complaining did her complaining stop bothering me. These days, when someone's behavior gets under my skin, I take a good look at my own behavior. As soon as I recognize self, I know what to do to fix the problem.
Posted by Betsy Otter Thompson at 1:45 PM 1 comment: 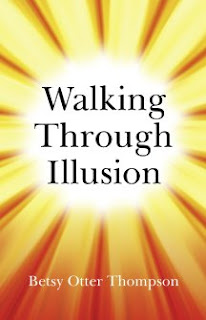 Conversations with spirit will follow.
Posted by Betsy Otter Thompson at 11:19 AM No comments: